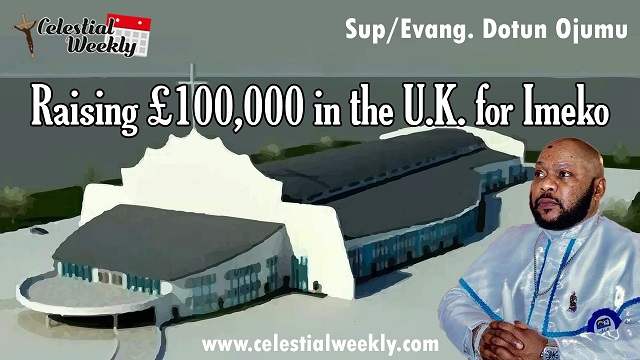 CW: Thank you for taking the time to talk to us about this very important work you are doing.

We understand you started an initiative to raise £100,000 from 500 professionals within the UK. What inspired you to take this bold step?

DO: Halleluyah. It is a pleasure for you guys to ask me this question. The initiative came into being towards the end of 2017. It used to be Imeko cathedral when the foundation ws laid over 30 years ago. And we do have a system where parishes are encouraged to make weekly or monthly contributions towards the development, but that has been static for so long. There was no development, until last year. Last year December during the convocation, we all witnessed what we we never thought would happen; the roofing of Imeko. So, my initiative was based on the development I witnessed last year December. That is why I introduced the concept in January 2018 in the UK.

CW: Thank you for providing this insight sir.

You mentioned that there is a system in individual parishes. As we understand it, every parish collects – or used to collect – funds for Imeko. So why is this initiative any different? And why should people contribute through this initiative as opposed to through their own parishes?

DO: There is nothing wrong with CCC. Spiritually we are sound. The issue we have is the problem Nigeria has today, which is transparency and accountability. For us not being able to separate church accounts from Imeko accounts contributed to the problem Imeko had. I have been a church administrator for a very long time. I have worked with different parishes, and I have come to the realisation that when these funds are being contributed towards Imeko it goes into the church funds. Most parishes are unable to differentiate what is meant for Imeko and what is meant for their parishes. So, because of this, majority of parishes do not channel funds designated for Imeko to the central account and Ketu. So, because of this, the development of Imeko was static because not enough money was being channelled for the (then) cathedral.

CW: Thank you for that clarification sir.

The goal was to achieve £100,000 within 10 months. Was this achieved within the set timescale? And if not, how much was raised, and what happens next?

DO: The first thing I did was open a business account for this initiative. So, my idea was to have 500 people to contribute £200 within the span of 10 months. So, if we have 500 people contributing a minimum of £20 every month towards the Imeko development, January to October that gives us the sum of £100,000. But our people being what we are, if a system is not trusted or trusted, people find it difficult to sign on to it.

I requested for 500 volunteers (it wasn’t forced on anyone), but I only had 47 volunteers. Out of these 47 volunteers, I had 15 parishes (that means 15 shepherds trusted me). We also had two business owners which are Celestials, both of them are solicitor firms that contributed. So in all we were able to raise £8,630 between January and October.

DO: As you are aware, we have different diocese and different H.O.D’s in the UK. And for us to be able to come together to do this, we do not want to align ourselves with a particular leadership. Our objective then is for Imeko and Imeko only. So, we operated under SBJ Oschoffa, which happens to be the founder. Irrespective of where you below, we need to do this and do it under ‘CCC UK UNITES’. This is what we called the group.

One of the challenges I faced was “Oh, Evangelist Dotun is working for Ketu”. Ketu is one of the factions of leadership in CCC. My personal parish belongs to Ketu. So, people from other factions are saying it was Ketu’s initiative. So they started discouraging others saying don’t join them, they are trying to use it to gather money for Ketu.

I always say to people you need to recognise failure. Because if you do not recognise failure you will not be able to do anything to correct the past mistake. Failure of the past in the sense that we have been collecting money for Imeko for over 30 years, and it has not come to actualisation. So based on the previous experience a lot of people have had, and the mismanagement of funds (I am not saying people are siphoning money, I am talking about a lack of accountability and transparency), people will not trust us.

Other challenges I faced; we have a generation of well-educated Celestians now. The youths, project managers and people in high places that run businesses themselves. They are looking at the way we run CCC administration and think it is not being properly run. So, people are being discouraged from joining the group.

Also, some people could not take “Faction” or “Division” out of their mindset. So they think “Imeko cannot be done”. It is not that Imeko cannot be completed, but they do not believe this present administration should be the one to take the glory for Imeko. The division among us as Celestians was so paramount.

The leadership in the UK wanted me to come on board and bring the project under them. But because the project was being run independent of all diocese – that is, we are not aligning ourselves to a particular diocese – I am going to be letting down the rest of the stakeholders if I now I say I am going to Diocese A, this is the way Diocese A is going to be running it. Come next time, if anybody get up they will make reference to what Evangelist Dotun has done – “Oh, you promised us that we are going to run this independently, but it is being run by a diocese”. My shepherd happens to be the Deputy H.O.D. of one of the factions. I faced challenges from him as well, from the church where I worship, because it is like I am being a rebel, I am not listening to them. The leadership also was looking at me saying “he’s arrogant, he’s so proud”. But they are forgetting what we are trying to achieve, so that is also a challenge for me that I have to overcome. But in all, all glory, honour and adoration to Almighty God that sustained us, that still made some people to believe in what we are doing.

CW: How supportive has the Imeko Building Committee in Nigeria been of this initiative?

When I visited Nigeria in May, and I tried to get to Imeko and I couldn’t see the people in charge. When I came back I called them and they said “oh, that is very good” and thy prayed for us. I said to them when this money is realised, we want to use it for a specific project in the basilica, we are not just making money to say take this money this is what we have contributed. We want something to be done in our name, saying this was done courtesy of ‘CCC UK UNITES’. And they said that is perfect, they don’t have any problem with is. And I said to them, if you don’t mind sir, can you come on to our forum so you can follow what we are doing and any concerns we want to put across you can expatiate on it? And with all due respect, Superior Evangelist Ogunremi has been so wonderful, such a father and such a leader. When he came on board, he explained everything to us, and he highlighted to us projects that are outstanding and based on our contribution what it can sustain. So, I do not have any other word but a good word of appreciation and good leadership for the Imeko Central Building Committee.

CW: Great, thank you sir. So, moving on to the next question now, there are a large number of people who have lost interest in building Imeko because of the fear of funds being mismanaged – which is something you mentioned earlier – what advice or words of encouragement do you have for them?

DO: Thank you so much. Seeing is believing. With the progress being made so far in Imeko, we can see that Imeko is fast moving. And for the record, the contractors work 24/7 in order to get the place ready for December – so they work all night. And every day the Imeko Building Committee send the picture of what was done yesterday and what is being done today. They normally send it to our group.

And the initiative that CCC UK UNITES has embarked on, for transparency purposes, we have released the names of people that contributed and the amounts contributed so far. So that everybody will say that whatever they said they have contributed is what has been recorded, and what has been deposited at the Imeko Central Account. So, my advice to them is don’t let us live in the past. It’s time for us to embrace our church and our heritage and see the progress that is being done. And in our own little way, we should be able to come on board and say “this is my little contribution for the development of Imeko”.

Please Note: Sup/Evang. Dotun Ojumu has forwarded a well detailed spreadsheet containing members’ contributions and the total amount raised. He has advised that he has the consent of all members to publish this information for the purpose of accountability and transparency. A link to this document can be found HERE.

CW: Thank you sir. Finally, for those who may be interested, how can they get involved with this initiative? 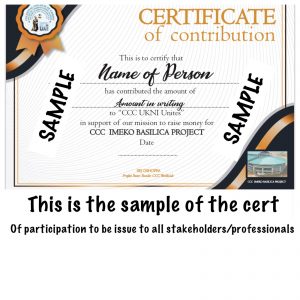 So, apart from the certificate serving as a receipt, it serves as a commitment. We all have anointing certificate, baptism certificate, so that in future we can be able to say “Oh, this is work I was part of and I actually contributed”. Because the money being contributed in churches is not being receipted, so there is no receipt for it. With that certificate it shows you are part of it, “this is my certificate of my contribution”.

I can be reached through Celestial Weekly and you can direct them to us. But my number is 07984 807549 and my email is dotunojumu@hotmail.co.uk. We are an open group, but we are so strict in the group, we do not entertain posting of unnecessary prayer or chain messages. It is solely on Imeko.

CW: That is wonderful. Thank you for this information sir. With this, our interview has reached its conclusion. We thank you again for your time. May The Lord strengthen you for the work you are doing and all those assisting you.

DO: Thank you so much Celestial Weekly. You guys are doing fantastic work. You are also doing your own bit for CCC. Because what you’ve come up with, with the app, it notifies me when it’s Mercy Day and Power Day, and it notifies me the Bible lessons. It’s our own little way that we can contribute to the progress of this church. So, on behalf of myself and my family, I congratulate the management and the organiser of Celestial Weekly for doing a fantastic job as well.

CW: Thank you for your encouragement sir. 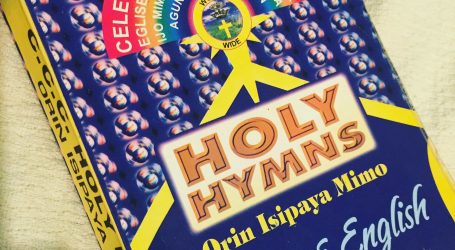 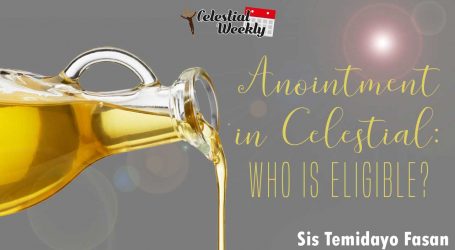