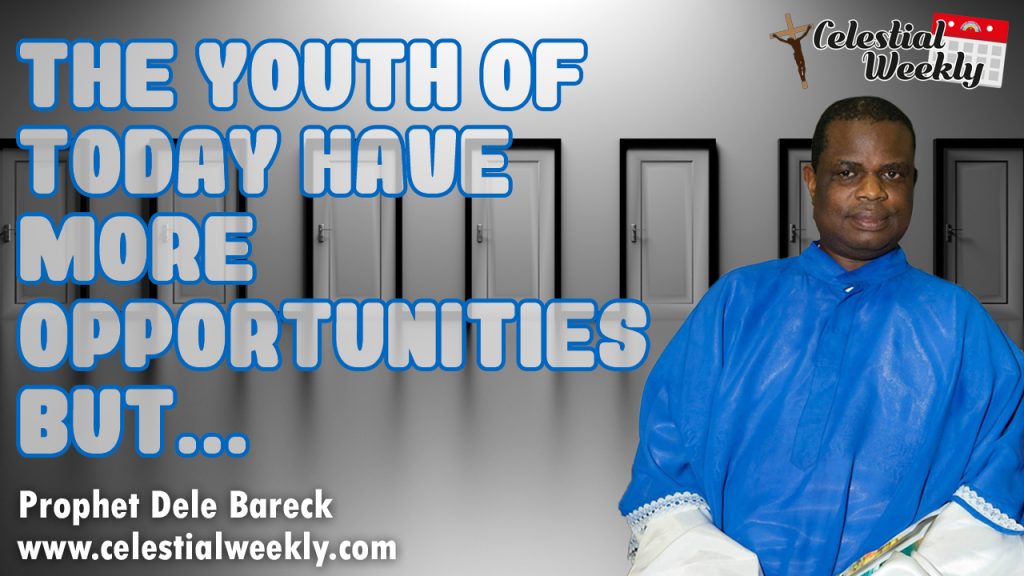 CW: You’re quite passionate about the development of the youth because you joined Celestial as a youth yourself, and your experience was quite unique.

Could you tell us again how you joined CCC?

DB: I actually joined CCC as a child, around 14/15 years old. It was a divine experience. If I was to look at the behaviour of the Celestials I knew at the time, I wouldn’t have joined at all but it was God’s plan.

I joined Celestial out of play. And then one day, I was outside CCC Oshodi 2 Parish waiting to fight someone when something came from heaven and fell on me. It knocked me on the floor. So, I experienced what Paul experienced on the road to Damascus.

At first, I struggled. When I joined, I was a DJ. But after receiving The Holy Spirit things started to change. Sometimes, if I even just looked at a woman [lustfully], I might knock my head on the wall. There was a lady I was helping when I was at Ibadan Polytechnic. I fancied her but I couldn’t do anything. I only slept near her, I did not touch her – but they had to rush me to church.

God took me with a mighty hand and I knew I had to surrender. He took everything about [my old] life away from me. Many things became irritating to me.

CW: As a young man in the fold, what sort of activities were you involved in?

Luckily for me there was a young prophet I worked with when I joined. He’s late now – Woli Kay. He was very popular and spiritually built. God wanted to use him in his youth, so he couldn’t go to school because of how The Spirit used to use him. We used to go and pray for people, sanctify houses, ishona [enquire of God for people wanting spiritual guidance]. We used to go to the seaside for seven days to pray for people and we wouldn’t eat for the whole time we were there. God used us mightily. Millionaires would come; people with problems; those looking for children would come and we prayed for them. But there are some jobs [spiritual works] Woli Kay would do that I won’t participate in – he knew that.

CW: How old were you at this point in time, sir?

DB: 15 years old. There were churches around me, but I didn’t like them. The one day he [Woli Kay] took me to the type of church I was looking for. In that parish the only place you can see candle is on the altar. They didn’t do any kind of jobs, nothing, you just go there and worship God day and night.

We would be in the Mercy Land day and night. We would run from school and go to church. We just became addicted – we denied ourselves everything at a very young age, and people thought we were mad.

There was even a time people wanted to travel. There was a day I had to be in the altar just praying for people who were going abroad until they landed at the other airport.

Another thing that happened; there was a lady who had been pregnant for three years. They told us about her and we went to pray for her, there was seven of us. When we were praying, everyone started falling but I was the only one that remained standing. We ran away because we were being attacked spiritually. But praise be to God, because later that night the woman told us an angel came and rubbed her womb. That’s how she gave birth.

I also remember one time that we went to sanctify the house of a man that wanted to become a king. It was a massive house. There was all this juju charms all over the place but we feared nothing, we just used our hand to clear everything. There was a particular one at the door and the man said “don’t touch that one”. He said that was his life, and I said we have to remove it. We burnt it and replaced it with a cross.

I’ll give you an example. We started a parish in Ikeja. A lady I will never forget came in and she wanted to try the power of God. I remember I took my loin and I nearly flogged her to death. They had to drag me away and I was still beating her. She wasn’t a Celestial, she came in mufti [plain clothes].

Again, God gave me the power of healing, and I still exercise it today. That’s a testimony I have – that when I lay hands on people, they receive healing. So many impossible things became possible when we prayed. We didn’t do it – God did it through us. All glory to Him.

The key for us then [as youth engaging in spiritual works] was prayer, fasting and keeping ourselves holy. We also had such a great thirst for the work of God. The only thing that reduced my involvement was when I gained admission into Ibadan Polytechnic.

CW: Do you believe the church today has changed so much, that perhaps many of the youth of today are deprived of real demonstrations of God’s power like in your experience as a young man?

DB: Yes and No. During our time, when The Spirit came upon us, the shepherds couldn’t identify it. To them, we were nobody. And again, they wanted us to face our studies. They didn’t recognise the youth to do God’s work. There were a lot of young people God empowered to do His work, but they didn’t allow it. They believed we should always be in school. It was very tough back then, and I can understand why the elders refused – school is very important. But their thinking was also that the youth were lazy and school drop-outs if you were always in church.

It was only if you met the right person that would encourage you. Such a person might take you to Papa [Rev. SBJ Oshoffa] and he will see you and say okay [continue with your spiritual assignments]. It wasn’t easy for the youth to come up then then until they started the Student Parishes. Before there wasn’t much room for us and there were so many barriers.

One time, Baba Bada came and packed up our altar. But it didn’t stop us. Baba Fada [Rev. Adepetun], he knew me very well when we used to go around praying for people.

CW: Why did Baba Bada take the altar away, sir?

DB: Because there’s a way you establish a parish. You can’t just set up an altar anyhow, and in those days, you weren’t allowed to use a flat for a church.

The type of spirit in the UK is different. It’s not that we don’t worship. But the youth in Nigeria are thirsty for God, they want to worship. They participate in everything they can and they accept correction, they will not quote law. And the atmosphere in Celestial in Nigeria is quite different from here [UK]. Over here, the only time they open church is Sunday [only for service days]. But in Nigeria, they do most services plus the three hourly prayers [every day].

Then also, there are so many people walking in the flesh. Fornication and adultery are now rampant. Then, we used to respect the church environment and the altar. These days we don’t have that respect anymore. Sanctification and holiness was paramount. But the church is like a club house now, there’s gossip, etc. In Nigeria, they wouldn’t even allow you in the church with mufti – the standards were different. But even in Nigeria, I’ve heard things have changed.

Before the spirit was just there and it would just come, but now you have to fight for it to get it. And again, the youth then from 10 years old received The Spirit and were giving messages. Some elders allowed the youth to pray for people and join in on three members prayers, etc. So, all that occupied the youth and they had things to do in the church. As long as you’ve done baptism in Celestial you’re allowed to pray for people. So all this is why I don’t compare Celestial in UK [with Nigeria] because of the environment here.

The youth now have more opportunity, but they’re being dragged away from what we received back then. Back then we were eager for prophecy, the opportunity to pray for people and things like that. But the youth now are more focused on Bible, preaching, symposiums on what’s happening in the environment and sex before marriage, etc. This is quite different. I’m not saying these things aren’t good, but Celestial is based on the things of The Spirit. Back then we were thinking more spiritual because we were facing witches and wizards; people were facing serious problems and people were looking for work. These are the things we focused on. On Tuesdays, so many people wanted to seek the voice of God so they would put us in spirit to do that.

Most youth these days – even my children – they don’t want to know, they block the spirit. But in Celestial you need that spirit to work.

CW: As a Deputy Head of Province in the UK/NI diocese, you’re constantly involved in conversations about the progress of the church. This involves discussions about the youth in the diocese.

In your opinion sir, what are some of the problems you think the youth are faced with, and what conversations is the diocese having around dealing with these matters?

DB: The main problem now is between the new diocese and the youth. The diocese wants something to be under the umbrella of Pastor Mobiyina Oshoffa. And the youth want a unified Celestial, bringing other [youth from other] pastors to become one because that’s how it’s always been for them. But the new diocese is saying no, everyone under the diocese has to come under Pastor Mobiyina [exclusively]. The youth say they don’t want that.

Everyone wants Celestial to be under one umbrella, but the church has gone beyond that. So, the youth should think about it – that’s just my advice. This is being done to bring discipline to the church. 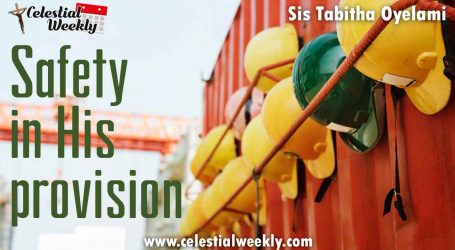 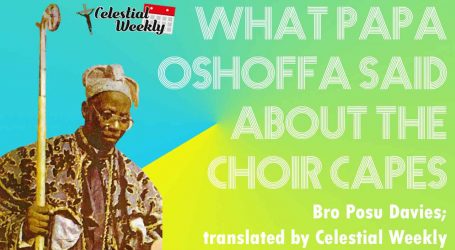 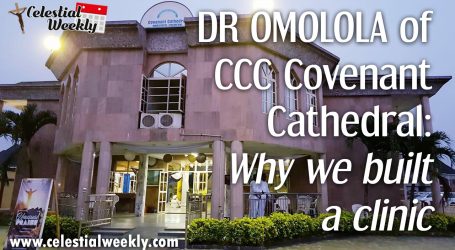