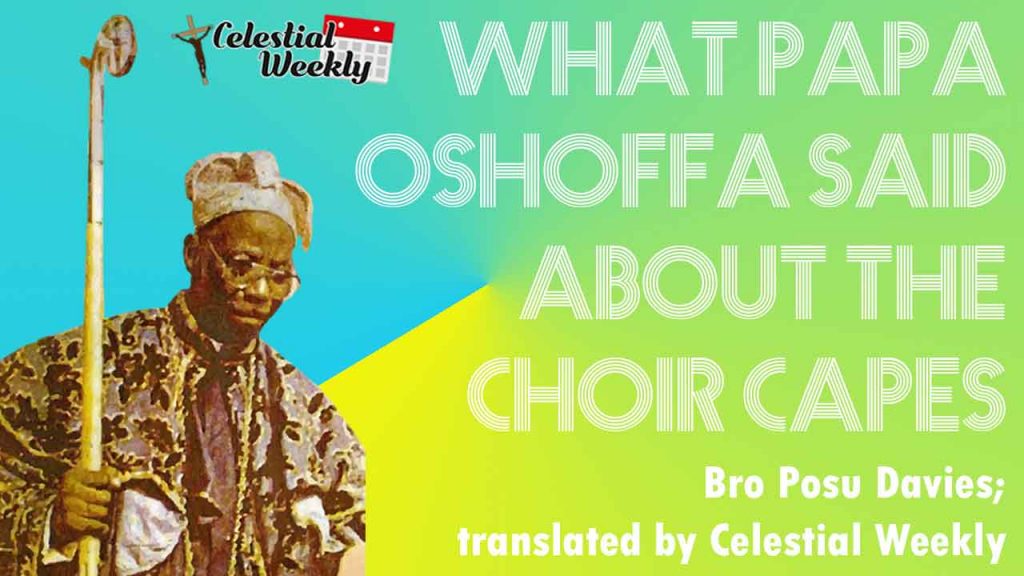 June 17, 2018
Author: Posu Davies
Views: 4717
Good morning to you all valuable and meaningful Celestians. Having entertain numerous questions on the Cape of the choristers of Celestial Church of Christ during my lecture in various parishes, I have now decided to come up with what many Celestians can use as a reference for their various proofs.

Also this short piece of writing came into being in order to clear all shadows of doubts and to shed light on the uniform in question. In similar fashion, it is purposely written to also put away the age-long lies hovering around the spiritual regalia from anyone.

I shall welcome all comments and attend to them with all sense of sincerity….. Enjoy.

The Reverend Pastor, Prophet and Founder of Celestial Church of Christ worldwide Papa Samuel Bilewu Joseph Oshoffa in 1982 was asked to give the divine interpretation behind the choristers regalia called ‘CAPE’ shortly after the elders meeting with Baba Abiodun Alexander Bada, Ogunlesi, Agbaosi and the rest of them.

Papa coughed gently, rubbed his nose with the thumb and index finger of his right hand. He positioned himself and said ” Halleluyah, ki n to dahun ibeere yin mo fe salaye oro kekere kan nipa aso awon akorin. Gbogbo akorin ti o ba wo aso na, ki won mo wipe, aso evanjelisi (EVANGELIST) ni a gbe wo won lorun. A fi eyin dawon lola ni ati wipe, ise ihinrere ni a gbe lewon lowo lati korin ki awon eniyan le ri iwosan, ki awon alaboyun inu ijo Olorun le ma a bi were, ki awon agan le ma a towo ala bosun, ki were le gba itusile logan, ki onirobinuje le di layo, ki Emimimo Olorun Oba Alaye le ma sise re loorekoore, ati beebeelo.” Translation: “Halleluyah before I answer your question, I want to explain a small thing about the choir cape. Each choir member that wears the choir cape should be aware that it is an evangelist cloth that they are wearing. This honours them and also the work of good news is upon them to sing so that people can receive healing, so that the pregnant ones in God’s church can give birth easily, that the barren can have children, that mentally unstable people can receive relief immediately, that the sorrowful can have joy, that the Holy Spirit of God, King of life can work His work anytime and so on and so forth.”

Papa summed that aspect up by adding this clause ” Evanjelisi ni won nitori aso won ti afi fun mi latorunwa, a se alaye re ati itumo re fun mi wipe idi ti awo (colour) re ma fi ni buulu (blue) ati alawo oju orun irole (yellow) {crepuscular} lara ni wipe evanjelisi tiwon naa gbodo ni awo (colour) ti evanjelisi inu ijo maa n ni eyi ti o maa n ni buulu (blue) ati yellow.” Translation: “They are evangelists because of their robes that was divinely given to me, it was explained to me that their cape must have the blue and the yellow colour of the evening sun because their own category of evangelists must also have the colour of the line of the evangelists in the church, having blue and yellow.” He said “Superior, (that was the name he usually call Baba Bada) o ye ki oro yi ye o. ” Translation: “Superior, you must understand these points.” Bada and others nodded in agreement.

To the colours and what they signify, Papa also explained them that very day. He continued ” Gege bi mo ti n ba oro mi bo, a salaye fun mi nigba ti a fun mi ni aso akorin bayi wipe, ayanfe itumo awon awo aso na re e.” Translation: “As I was saying, it was explained to me when i was given the choir cape thus; beloved the interpretation of the colours of the cape is this.”

He said it was now shown to him with clear explanations as follows:
” Igun meta ti aso na a ni tumo si Olorun Metalokan (This means God, the Trininity: God, The Father, The Son and The Holy Spirit ). He said” won tesiwaju ninu iran (vision) na pelu alaye nipa Olorun Metalokan wipe igun apa otun (the right hand side) tumo si ‘Olorun Baba’ (God, The Father), igun apa osi ( the left hand side) tumo si Omo (The Son) ati igun ti o wa si igba-aya (the part towards the sternum) tumo si Emimimo. Translation: “The three angles of the cape signifies the trinity. They continued (in the vision) the interpretation of the trinity, the angle at the right hand signifies the Father, the left the son and the angle that comes to the sternum is the Holy Spirit.”
He was asked why that of the sternum carried the name ” Emimimo” (The Holy Spirit) and not the other two. Papa smiled and said ” E seun lopolopo. He continued ” idi na re : a so fun mi pe igbakigba ti won ba ko Orin, Emimimo yoo darapo mo o, Yoo si sin Orin naa lo sinu ijo Olorun ati ayika re lati se ise asepe lara awon eniyan. itunmo re niyen.” Translation: “thank you very much.” He continued, “this is the reason, i was told that whenever they sing the Holy Spirit will be joined with them, and will accompany the song into the church and the environs to work perfect works on the people. That is the interpretation.” On hearing this spiritual interpretation, they all clapped for Papa.

Papa continued while smiling and said ” Akorin ti a fi fun mi, a so fun mi wipe Olorun Metalokan yoo joko sinu aye akorin to o ba ti wo aso ( CAPE) naa, eyikeyi ti o ba fi ara re sile, ti o si ya ara re simimo yoo ri wipe a ti gbe ara oun wo.” Translation: “the choir handed down to me, it was told to me that the trinity would sit in the life of a chorister that puts on the cape , whosoever will submit himself and sanctifies his or her body will notice that he or she has been transformed.” They also clapped for him in a thunderous manner.

Papa Oshoffa also explained the meaning of colour yellow of the V-necked pattern and said ” Yellow to wa loke tumo si ilera Olorun (Health).”
He continued by saying ” awo Buulu (Blue) ti o dabi ileke nla tumo si ife Olorun (Olorun)
Translation: “Yellow at top (as the triangle) is interpreted as the health of God. The blue as the surplice is interpreted as the love of God.”

Papa Oshoffa was asked to explain in general and he said ” Kamaforogun, bi a ba bi yin leere itunmo re nigbakigba e maa wipe : Ilera Olorun pelu ife si Omo araye (tabi ni kukuru), si araye.” Translation: “Without much ado, when you asked the interpretation at anytime say: the health of God with love unto the world (or in short) to the world.”

This means ‘ the Health of God through Love to Humanity or the World.
After this, he stood up, prayed again and they chanted Halleluiah three times.

These are the words of Samuel Bilewu Joseph Oshoffa on the Cape of the choristers of Celestial Church of Christ Worldwide.

Good morning to you all. Halleluyah